The Workflow feature is an advanced offering in the Integrate.io platform. For uses who want to combine various dataflow packages via a user-friendly interface, Workflows allow you to arrange your inter-dependent ETL tasks with some conditional logic.

In this post, we will cover what Workflows are and how they can help you manage inter-dependent ETL tasks. 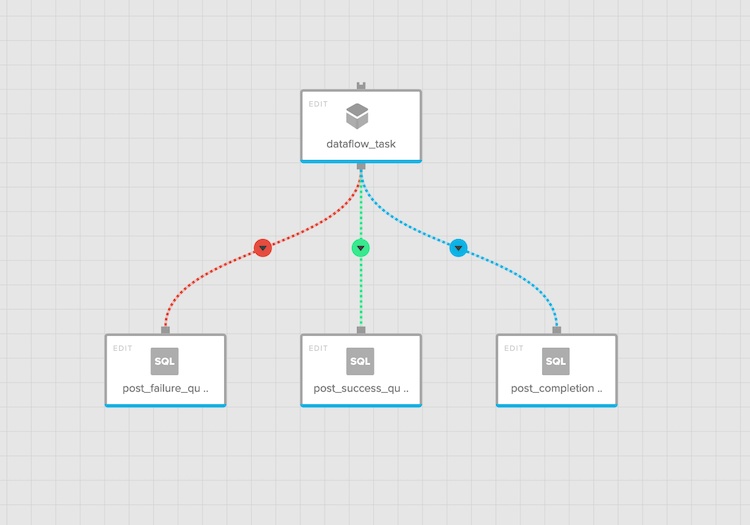 The execution statuses supported by Integrate.io are "on success," "on failure," or "on completion." When you run the above Workflow, dataflow_task (which runs a dataflow package) will be run first. The post_completion_query would be executed once the task completes, and either post_failure_query or post_success_query will be executed depending upon the success or failure of the task.

In Workflows, you can add pre-conditional logic to any task based on the preceding tasks' execution status. 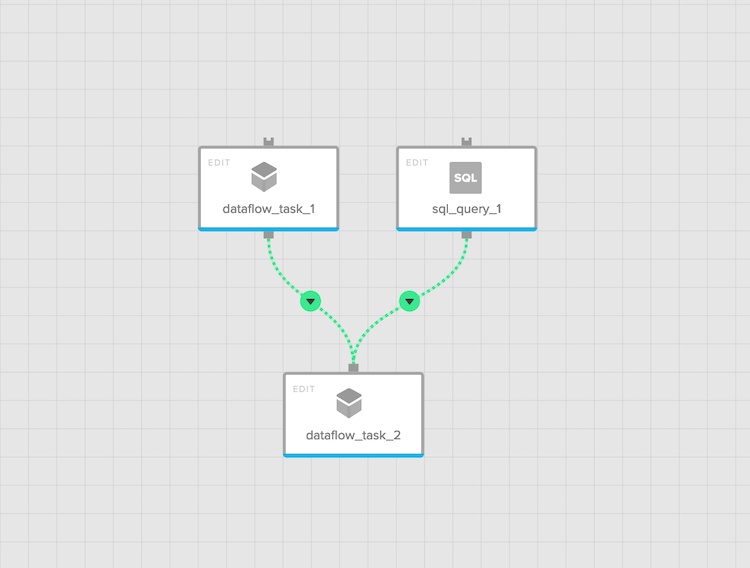 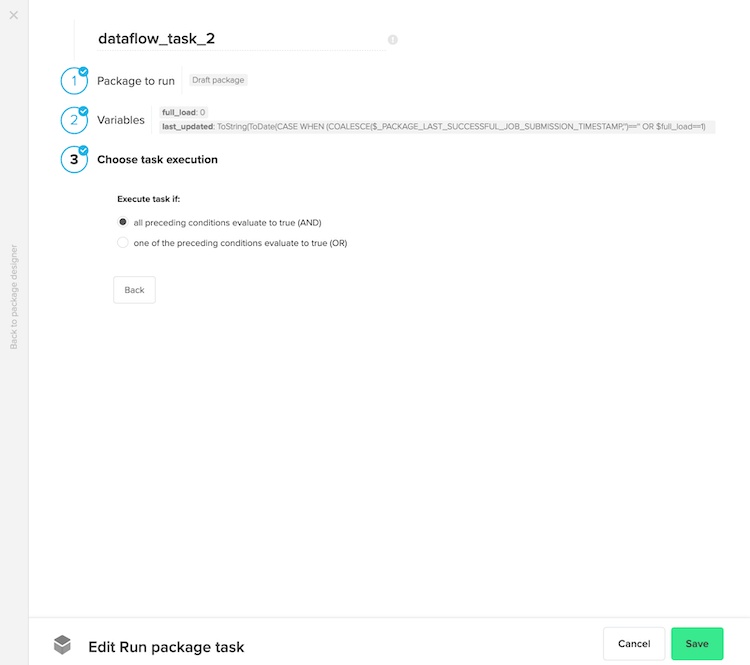 Features 1 and 2 combined can model complex execution profiles where we want our packages to be executed in a specific order (A before B, B, and C before D, etc.), and their execution is dependent on the success or completion of each other (run B if A fails, run D if both B and C succeed, etc.).

3) Pass Dynamic Variables to be Used in Tasks

SQL query tasks in a Workflow can return values (query results), which can be saved to Workflow variables containing a scalar value. This value can then be passed to successor query tasks or dataflow package tasks. 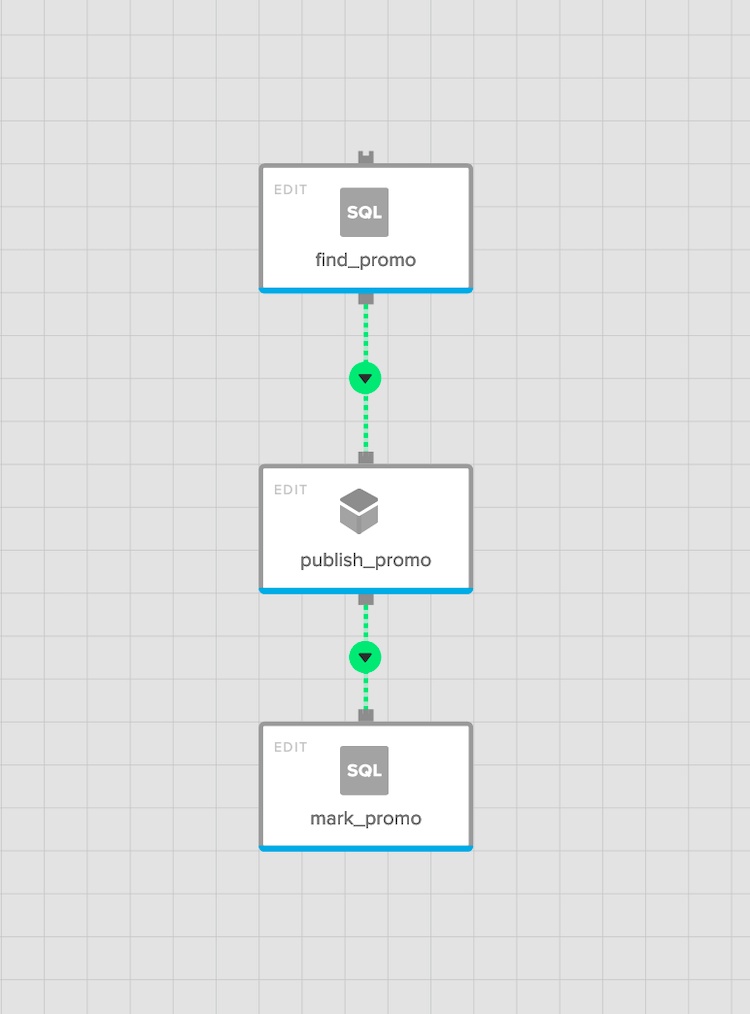 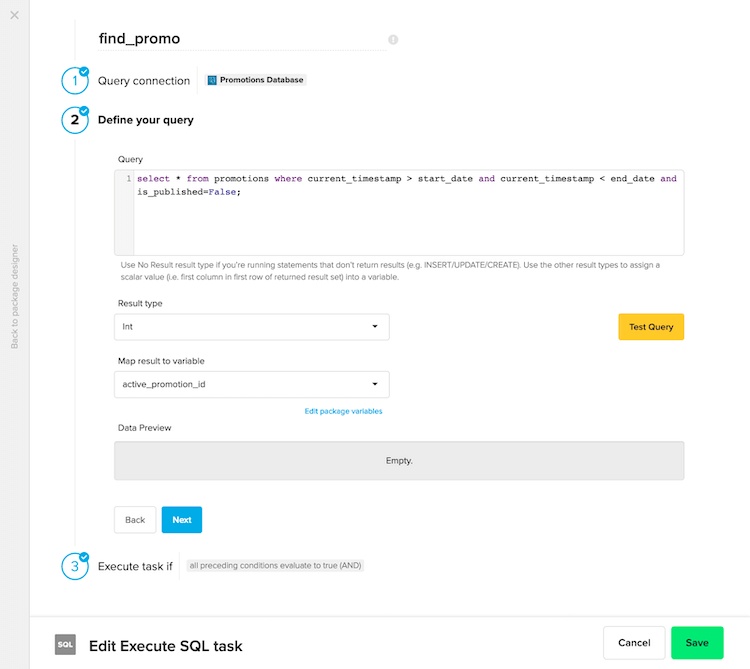 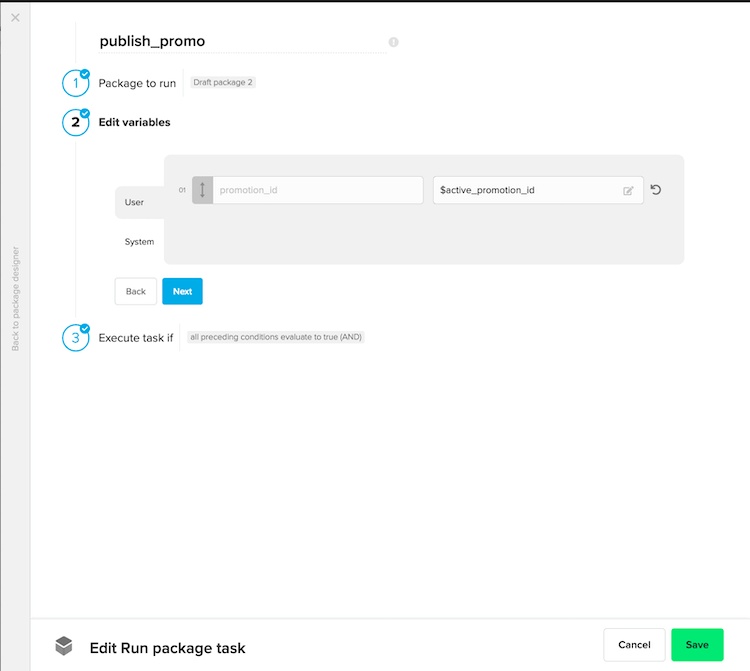 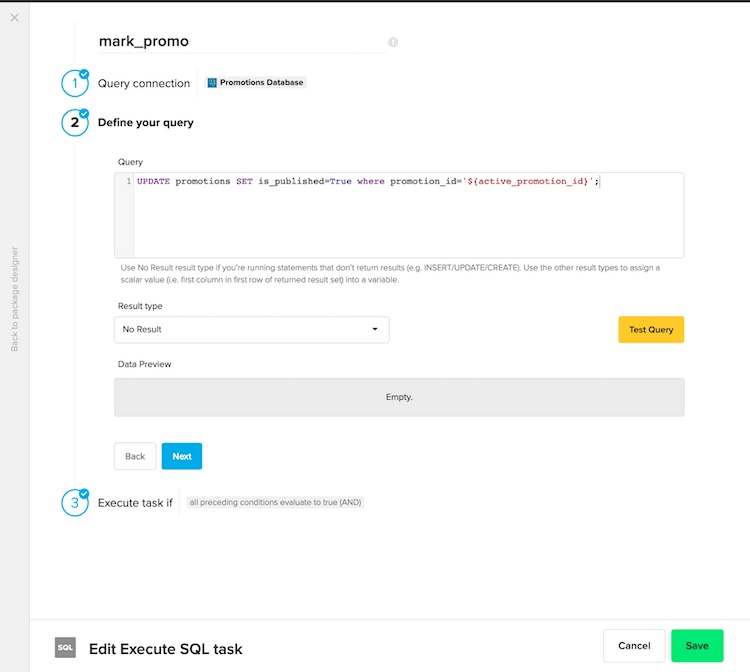 In the Workflow above, the first SQL query task checks for any active promotions that are not yet published. If there's any such promotion, its identifier is stored in the variable active_promotion_id (by default, the first column value in the first row of returned results is stored). This identifier is then passed to the dataflow package variable to the publish_promo package. Finally, if the package execution is successful, there's a query task to mark the promotion as published in the database. This query uses the same identifier to locate the promotion in the database.

An e-commerce company that uses Integrate.io runs periodic marketing campaigns and promotions to improve their business. To kickstart a campaign, they must run a few preparation tasks, and they may want to run some reconciliation tasks after it is over.

Here's one possible way they could define their Workflow:

Apart from the useful Workflow features discussed previously, here are some of the other ways in which Integrate.io helped the e-commerce company:

Here's a short video that implements a simplified version of the above use-case:

A simple but powerful feature, workflows allow you to combine various dataflows from within the user-friendly Integrate.io interface. For more information on how to build workflows, refer to our Creating a Workflow document or contact our support team for assistance.

By Lyndsay Wise
Organizations are starting to look more seriously at the health of their data and leveraging analytics to do so. Data observability gives organizations that ability but the market is still...
ETL February 03, 2023

HTPA — Pie in the Sky

By Bill Inmon
Analysts believe HTAP is the future of database warehousing. Bill Inmon says HTAP is Pie in the Sky. Here’s why.