Amazon Redshift’s DISTKEY and SORTKEY are a powerful set of tools for optimizing query performance. Because Redshift is a columnar database with compressed storage, it doesn't use indexes that way a transactional database such as MySQL or PostgreSQL would. Instead, it uses DISTKEYs and SORTKEYs.

Trying a Different DISTKEY and SORTKEY

In this example, I use a series of tables called system_errors# where # is a series of numbers. Each record of the table consists of an error that happened on a system, with its (1) timestamp, and (2) error code. Each table has 282 million rows in it (lots of errors!). Here, I have a query which I want to optimize. The query gets the number of errors per error type, for each time slice.

Before setting the DISTKEY, let’s create a table without it, and see how the query performs.

On my Redshift cluster (2-node dc1.large), the query took 20.52 seconds to execute. This isn’t too bad, considering the number of rows in the table. But if you look at the CPU usage, both compute nodes were used up to 30% of CPU. Let’s see how we can improve this by investigating our query performance.

Look at the warning sign! Something must have been wrong. Let’s see the details. 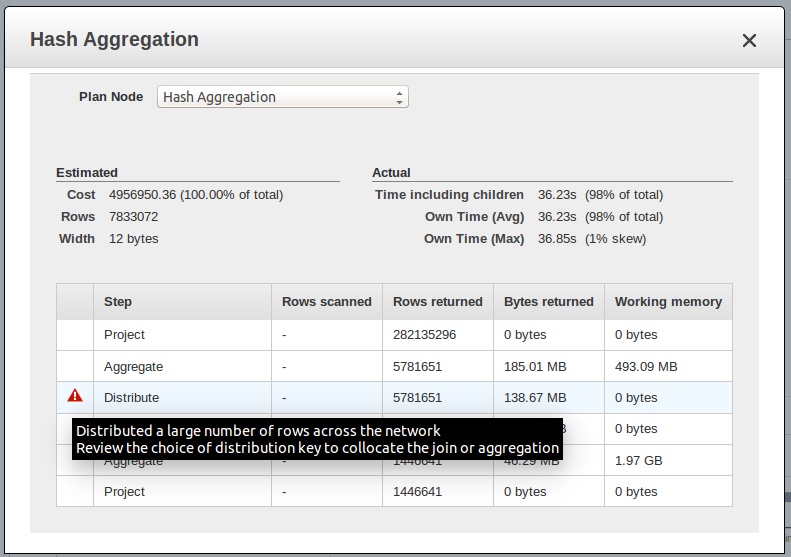 This warning occurred because rows to be aggregated (rows sharing the same err_code and created_at values) are spread across multiple compute nodes. Each node must aggregate its own rows first; then the leader node has to aggregate the results again. That's why you see two "Aggregate" steps in the above screenshot. More importantly, a large amount data was sent to the leader node across the network, which became the performance bottleneck. We can avoid this by putting all rows sharing the same err_code and created_at values on a single node. This can be done by defining the DISTKEY.

To collocate all relevant rows in a single node, we can use either the column err_code or created_at as the DISTKEY. Since I also want to run a query grouped by err_code without created_at, I chose err_code as DISTKEY and SORTKEY.

Let’s see how the query performs against the new table.

We created two tables with and without DISTKEY and found that the one with the DISTKEY was much slower than the other.

Why did this happen? Let’s check the query’s execution details.

You can see that one of the error codes (1204) has an extremely large number of rows compared to the others. It actually has 95.5% of the rows in the table. Because we used err_code as the DISTKEY, at least 95.5% of the rows were put on one particular node. This is the so-called skew. When such skew occurs, the total query processing time takes much longer because the performance is capped by the slowest processing node; i.e., the query cannot be spread across multiple nodes. In this (extreme) case, almost all the rows were processed by a single node. That is why the query took longer than the query made against the table without a DISTKEY.

Trying a Different DISTKEY and SORTKEY

Since the values of the column err_code was too skewed to use as a DISTKEY, let’s use the other column created_at instead.

The same query now takes only 8.32 seconds to return, more than 6 times faster than the previous query, and more than twice as fast as our very first query. CPU Utilization is also much better; 10% vs the previous 30%.

Query execution details look good as well. Skew is minimal, and also there is no warning sign for a large data transfer across the network.

If you look at the details of Hash Aggregation, you will notice that the steps are much more simplified compared to our very first query. The double "Aggregate" is no longer to be seen! Integrate.io provides continuous, real-time database replication to Amazon Redshift and Snowflake. It offers a reliable, powerful way to simplify your data analytics pipeline in a single interface without manual scripting. With a free 14-day trial, you can get your data synced in just minutes. For questions about Integrate.io and how we can help accelerate your use-case and journey on Amazon Redshift, connect with us by clicking "Get Started".

MongoDB vs. Redis — Which Database Should You Use?

The Top Heroku Events for 2023

By Mark Smallcombe
Do you work with Heroku? Stay informed with these top Heroku events for developers and tech professionals.
Cloud Integration January 12, 2023

By Mark Smallcombe
When it comes to choosing a database, one of the biggest decisions is picking a relational (SQL) or non-relational (NoSQL) data structure. While both are viable options, there are key...
Share This Blog Post