Both schemas improve the speed and simplicity of read queries and complex data analysis—especially when dealing with large data sets that pull information from diverse sources.

Despite their similarities, star and snowflake schemas have key differences that every data scientist and data engineer needs to understand. To answer the question of Snowflake Schemas vs. Star Schemas, we'll begin with an in-depth discussion of star schemas. Then, we'll move into snowflake schemas and explore what makes them unique.

What is a Star Schema?

Star schemas offer the simplest structure for organizing data into a data warehouse. The center of a star schema consists of one or multiple “fact tables” that index a series of “dimension tables.” To understand star schemas—and for that matter snowflake schemas—it's important to look at fact tables and dimension tables in depth.

The purpose of a star schema is to cull out numerical "fact" data relating to a business and separate it from the descriptive, or “dimensional" data. Fact data will include information like price, weight, speed, and quantities—i.e., data in a numerical format. Dimensional data will include uncountable things like colors, model names, geographical locations, employee names, salesperson names, etc., along with the numerical information.

The fact data gets organized into fact tables, and the dimensional data into dimension tables. Fact tables are the points of integration at the center of the star schema in the data warehouse. They allow machine learning tools to analyze the data as a single unit, and they allow other business systems to access the data together. Dimension tables hold and manage the data—numerical and nonnumerical—which converges through fact tables that make up the data warehouse.

From a more technical perspective, fact tables keep track of numerical information related to different events. For example, they might include numeric values along with foreign keys that map to additional (descriptive and nonnumerical) information in the dimension tables. Getting even more technical, fact tables maintain a low level of granularity (or “detail”), which is to say, they record information at a more atomic level. This could lead to the buildup of many records within the fact table over time.

There are three main kinds of fact tables:

Dimension tables normally store fewer records than fact tables; however—in addition to storing numerical data—the records in dimension tables also include descriptive attributes. There are many types of dimension tables depending on the information system. Here are some examples:

How Fact Tables and Dimension Tables Work Together

Dimension tables usually list a surrogate primary key (i.e., a data type that consists of a single-column integer) that maps to attributes related to the natural key. Imagine you have a dimension table with information relating to different stores: "Dim_Store" (see Star Schema illustration below). You can assign an ID number to each store and its row of related nonnumerical and other information—like store name, size, location, number of employees, category, etc. As it follows, wherever you list the Store ID number on the fact table ("Fact_Sales"), it will map to that specific row of store data on the "Dim_Store" dimension table.

Of course, the star schema doesn't stop there—because there are additional points (or dimension tables) with information that links to the fact table. As an example, let's say you want to know the following for the time-period August 2019:

To conduct a query like this, you'll need to access data contained in all of the dimension tables (Dim_Date, Dim_Store, and Dim_Product). These are separate databases; however, through the fact table—which serves as a point of integration—you can query all of the data, akin to it being in a single table. And that's how a star schema data warehouse works!

The following diagram illustrates what a simple star schema looks like: 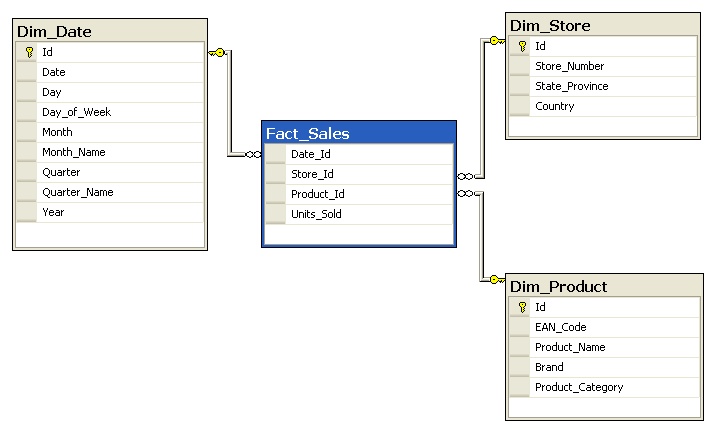 Here, the fact table, Fact_Sales, is at the center of the diagram. Its schema includes the following columns for ID numbers: Date_Id, Store_Id, Product_Id, and Units_Sold. As the point of integration, the fact table integrates the diverse information in the dimension tables: Dim_Product, Dim_Store, and Dim_Date.

Denormalization of Data in Star Schemas

The star schema’s goal is to speed up read queries and analysis for massive amounts of data contained in diverse databases with different source schemas. The star schema achieves this goal through the “denormalization” of the data within the network of dimension tables.

Traditionally, database managers sought the “normalization” of data by eliminating duplicate copies of the same data, which is to say, the normalization of the duplicate information into one copy. This made write commands faster because only one copy of the data needed updating.

When a data system expands into multiple dimension tables, however, accessing and analyzing data from multiple sources slows down read queries and analysis. To speed things up, the star schema relaxes the traditional rules of database normalization by “denormalizing” the data.

A star schema pulls the fact data (or ID number primary keys) from the dimension tables, duplicates this information, and stores it in the fact table. In that way, the fact table connects all of the information sources together. This makes read queries and analysis infinitely faster. However, it sacrifices the speed of write commands. The slower write commands happen because the system needs to update all counterpart copies of the “denormalized” data following each update.

As mentioned before, improving read queries and analysis in a star schema could involve certain challenges:

What is a Snowflake Schema?

Like snowflake patterns in nature, the snowflake database becomes exceedingly complex. The schema can produce elaborate data relationships, where child tables have more than one parent table.

Before we go too deep into the snowflaking concept, it's time to look at an illustration of a snowflake schema: 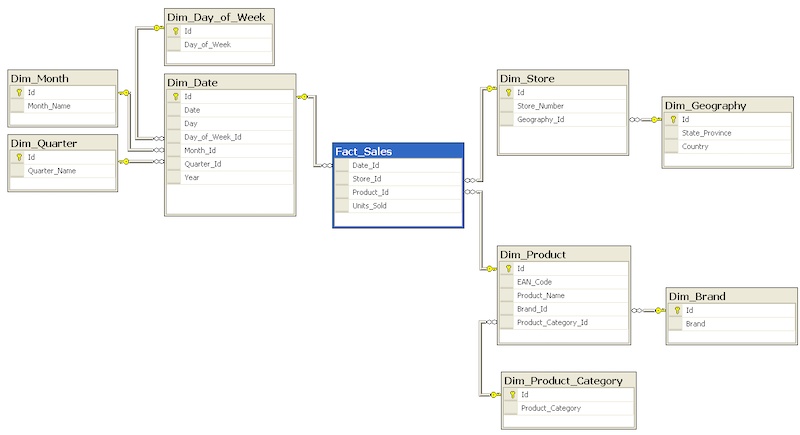 In the star schema example, Dim_Product included the nonnumerical names of the brands. Now it just includes the Brand_Id number which points to the Dim_Brand lookup table. By translating the Dim_Product table into a numerical value like this, we increase the speed at which the system can process queries. More importantly, we reduce the amount of space required to store data. That's because the Dim_Product table no longer includes multiple entries of the full names of brands (which are long strings of data compared to the Brand_Id numbers).

Long story short, a number requires a dramatically-reduced amount of space and time for processing than a written name or qualitative descriptive value. Therefore, snowflaking the dimension tables out into lookup tables can save a lot on storage costs when dealing with millions of rows and columns of data.

There are three potential challenges relating to snowflake schemas:

At Integrate.io, our automated ETL (extract, transform, load) tools help you seamlessly load data into data warehouses in near real-time. With our ETL tool, you don't need a highly-skilled data team to perform complex ETL functions. This will save you time and labor costs while integrating data into your data warehouse, all while preventing data loss and corruption.

Visit our website to learn more about Integrate.io and the hundreds of easy, out-of-the-box data integrations our platform provides or get in touch with the Integrate.io team today for a risk-free pilot.

With millions of data points being collected daily, storage is more critical than ever. Here is a breakdown of Firebolt's cloud-based solution.

Pushing Data from a Data Warehouse to Salesforce

Need to get data out of your data warehouse and into Salesforce? Follow this comprehensive guide.

How to Migrate Salesforce Data from Heroku

In this article, we show you how to migrate data from Heroku to Amazon S3.

What is Amazon Redshift Spectrum?